CNC 3D Printer and its Use in the Orthotic Field

Sharp Shape provides new technologies in the field of foot orthotic manufacturing and production. Located in the Silicon Valley, Sharp Shape always innovates. Recently, we made some significant advances in the orthotic industry including 3D printing software, in addition to the iPad Foot Scanner (AOMS TOT).

While waiting for another breakthrough in 3D printing speed and materials, we have decided to release an orthotic design software. It is called AOMS 3DPRN. It is still in the beta testing phase. For information about it, please visit: www.sharpshape.com/aoms3dprn.html. We are releasing the software, hoping some companies out there have better solutions in terms of speed and material. Technology is surely improving.

Recently we made some progress on the 3D-printer front. A business partner made this real-size orthotic (shown below) with his 3D printer. The material is ABS. The texture feels very nice. It is very clean and it looks like there are no supporting materials left. The only weakness remaining is the time. Although shortened, it still takes a little too long to make one. We are still making and waiting for a break-through. Click on one of the following two images to view the enlarged image. 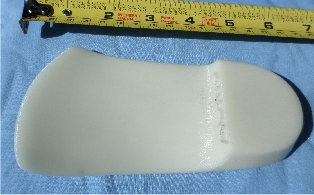 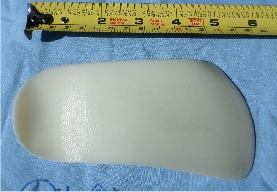 Some customers asked us about our readiness in 3D printing. We have followed the technology for more than 10 years and we have been developing software for custom 3D printed foot orthotics and insoles for many years. Right now, 3D printers made headlines and we took a closer look at the current technology. Further, we bought a 3D printer for R&D. Our concentration is on the 3D printer in the orthotic manufacturing field. Some findings are shown below and we want to share them with you.

Note: I am able to hold the AOMS lady in my hand for the first time, thanks to the 3D printer.

• Quick turnaround for prototyping. No longer need a heavy CNC mill/router to make prototype models.
• Making parts that cannot be made with a CNC mill/router, for example, making a ball with a hollow inside.
• Small footprint. Suitable for small spaces.
• Less expensive now.
• More environmentally friendly compared to a CNC mill/router.

• Slower speed for production, compared to a CNC mill/router. 4 to 5 hours for a single orthotic.
• Smaller build-area compared with the carving envelope of a CNC mill/router.
• Materials are very limited in options. PLA is most common. ABS is an option.

These pros and cons are changing with the improvements in technology. For example, the cost of the 3D printer is less expensive. $2,000 is a typical price. A CNC router costs $20,000. If we buy ten 3D printers and use them simultaneously, we may overcome the slow-speed disadvantage.

For orthotic production, two major concerns have not been resolved. First is the production speed and second is the choice in materials.

Side notes: sometimes 3D printing ended with errors (SD cannot be read or file error). A few times, the builds ended with mess-ups. It is hard to decide to use "supports" (the material underneath) or not. It is hard to clean these supports.

Our conclusions: it is a little too early to use the 3D printer in the orthotic productions now, because of the above mentioned facts. CNC mills and routers are still widely used in orthotic labs now. This may change along with time.

Here are some videos and photos: